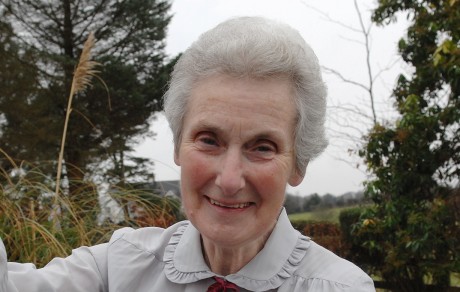 INSTEAD of taking life easy after almost 40 years tending to her patients, popular Irvinestown retired GP Dr Margaret Knox runs a flock of 54 sheep near her home on the Kesh Road.

And, in addition to her active involvement in the local community, her gardening, her music and walking, she is now the president of the Clogher Diocesan Mothers Union, having been a member for the past 38 years.

She was recently commissioned as MU president at a special service in Derryvullen North parish church (of which she is a member and parish reader) by the Church of Ireland bishop of Clogher, Rt Reverend John McDowell. He is also chaplain to the diocesan mothers’ union.

The service, which was prepared and conducted by the rector, Reverend Canon Glenn West, drew a congregation of some 300.

Speaking to the Herald, Dr Knox explained that the mothers’ union was to do with caring for families, preparing them for marriage and family life.
“We care for those in difficulty and, as well as that, we are a world-wide fellowship with over four million members.”

Dr Knox is a Donegal Town woman. Her late father, William Elliott was a pharmacist there and she came to Irvinestown with her family in 1955 and attended the Collegiate Grammar School and Queen’s University where she graduated in medicine in 1967.

Her late husband, Cecil died in 2009. They have one son, David who is married to Freya and they have a 21-month old baby, Charlie. The family live in London.

So, what does Dr Knox get up to on an average day?

If we explain that she was the Margaret Wilson Award winner in 2004 for voluntary endeavour, then one gets a good idea of her community involvement, the group, Trendsetters being just one example. But, few of her fellow citizens can match her unique shepherd’s role, one she pursues with her sheepdog, ‘Neil’.

“It’s a link with the past”, she explained. “My late husband was very interested in sheep farming, and, ‘Neil’ is a faithful and protective companion.”

Above all, she relishes her strong faith which, she said, had helped her through difficult times.